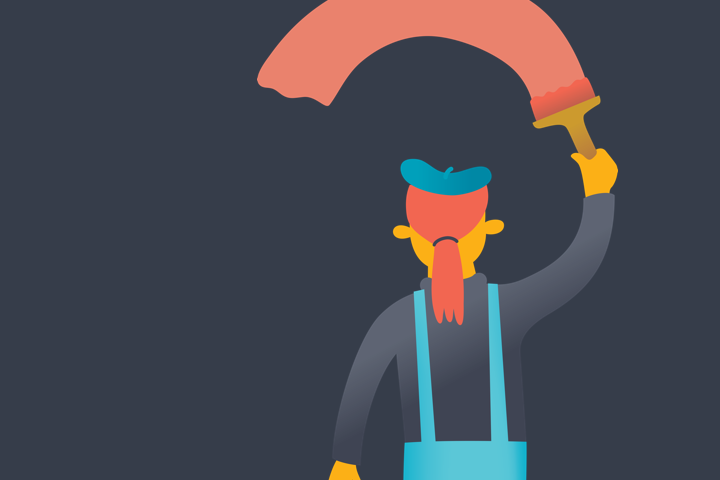 A brand is a representation of who you are as a business, and how you’re perceived. A brand is complex and emotionally boundless, which makes reducing a rebrand to ‘some changes in visuals’ pretty absurd.

What happens to the brand when a company changes its logo? Actually, not that much. A brand is more than just key visuals, icons, its products, and features. If you’d go get a new pair of shoes, you’d look pretty fabulous for sure. However, you’d still just be the same old you – with some fancy new shoes.

Now, let’s get to the heart of branding. Even though acquiring that fabulous pair of shoes might’ve felt like an impulse, it’s pretty likely that you actually got them because of brand loyalty – through known, or subconscious, emotional ties to that particular brand. This is what sets a brand apart from a copy, or why a brand speaking out about a social cause will make you perceive it as good. Branding. A rebrand is not just a change in visuals (a new pair of shoes), but a great way of highlighting or redefining company values, in order to communicate in a way that your target audience can relate to (a change in the narrative).

Yes, a Rebrand Can Happen Without Changes in Visuals

Visual changes can have a short-term influence on a company and are more often than not a part of the rebranding process. Nevertheless, they’re not (or shouldn’t be) what qualifies as a rebrand. They should be described as what they are – changes in visuals; a redesign at most. When a company changes its mission, the way they communicate, or generally just try to spark change by altering its core identity – that’s a rebrand. A brand is always evolving; what it is today might be different by tomorrow. To call for a rebrand means drastic changes in direction, not in colors.

Rebranding Shouldn't be a Thing

A brand is a living entity and should be treated as such. If you don’t give it attention, it’ll likely fade away. The purpose of a rebrand is to boost an already existing brand, presumably because it hasn’t been given the iterative and ever-changing attention that it needed. In the best of worlds, you would never have to do a rebrand – only slight adjustments – and a design-orientated facelift every now and then.

A Brand is Only What the Consumers See

It’s important to understand that a brand is not what a business looks like – it’s what is experienced by the people in contact with it. The goal of a company is not (or shouldn’t be) to create a brand visually, but to create a lasting positive perception that goes beyond that; into the experiences and emotions you’ve connected it to. By building powerful brand experiences, you empower your brand, and (by default) the organization. Every touchpoint that your customers have with it is shaping enduring brand perceptions. This is why consistency is key when building a strong brand.

Sometimes, Short-Term Changes Are Made with No Longevity in Mind

Rebranding a company takes time. Yes, it might require a logo change, a shift in colors, new presentations, and business cards. These visual facelifts often result in a small boost in business, and obviously, a fresh new look. It does, however, not tick the “rebranding box.”

A rebrand is made with the intent to change processes in the long run, creating something that is drastically changing the way people perceive their company. A lot of business leaders lack the time and energy to make those changes happen, because such changes demand (you guessed it) time and effort. They do generate a lot of positives, though.

Turning a sinking ship around is not easy, and even though changing a logo to go with what’s trendy that specific year might slightly boost profits, you’re still just putting a band-aid on a broken leg. A rebrand is heavy work, but once it's done, it’ll all be worth it.

Reading up about rebranding? You might be interested in learning about the key components of rebranding, what's good to know before you start a rebranding project, or to determine if now really is the right time for a rebrand. After that, to learn more about the scope of rebranding, understanding some of the different types of rebranding, and their rough costs, could also be of value.